County Council bid for £56 million to improve buses in Oxfordshire 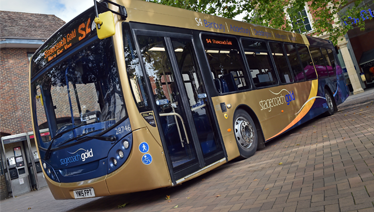 Ambitions include reviewing ticket fares and creating rural bus routes to get people out of their cars and on to buses again.

The council's Cabinet has backed a bid to secure £56 million from the government's £3 billion National Bus Strategy fund.

Passenger numbers in Oxfordshire have been declining between 2014 and 2019 and were badly hit by the pandemic.

The Council are planning to not just reverse this trend but to transform the Oxfordshire bus offer.

Councillor Tim Bearder, Oxfordshire County Council's Cabinet Member for Highways Management, said:  "Public transport is key to tackling the congestion that so often affects the county, in particular Oxford and its fragile infrastructure.

"Every motorist who is not on a bus is in front of a bus in their car. If we can get people who are able to take the bus to do so, then the buses will be quicker, more efficient, more reliable and, ultimately, cheaper.

"The aims of the National Bus Strategy align closely with our own, including investing in an inclusive, integrated and sustainable transport network, tackling inequality, and addressing the climate change emergency."

The council is finalising its Bus Service Improvement Plan (BSIP), which the public was invited to contribute to, and will submit it to the government later this month to bid for the funding. The ambitions for buses cover:

- New bus priority measures to speed up journeys
- More attractive fares and ticketing, including a review of fares for under 19s and potential discounts for lower-wage NHS employees
- Vehicles that are more comfortable and greener
- Improved information for passengers
- Better bus stop infrastructure
- Creating mobility hubs at key locations to provide better interchange between different modes of transport
- New rural bus routes
- The restoration of some cross-boundary bus services to neighbouring counties.

In June, the council agreed to establish an Enhanced Partnership and invited all of Oxfordshire's local bus operators to form closer joint working arrangements between the local authority and the providers.

The National Bus Strategy wants to see more people using more attractive bus services through revisions to fares, routes, hours of operation and availability of information, and to see improvements to reliability, punctuality, and journey speeds.