Coronavirus: Why Oxford Uni is so confident in an early vaccine win 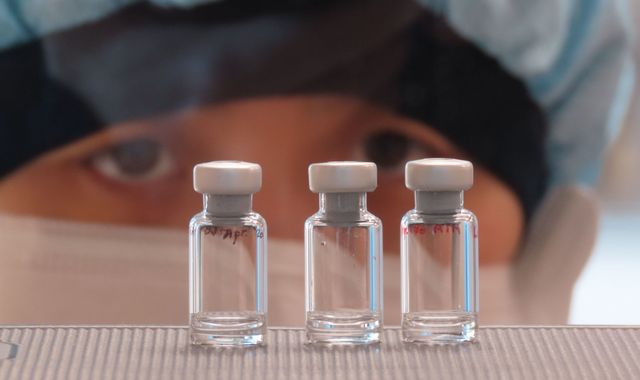 Scientists are extraordinarily confident that their vaccine against the coronavirus will work.

The government's chief medical officer insists a jab is still 12 to 18 months off and some form of social distancing will be needed until it's in widespread use.

But the team at the Jenner Institute, part of University of Oxford, believe they'll have a million doses and proof that it's safe and effective by September - just five months away.

Their confidence is built on past success. The same vaccine technology has been used on other diseases, including the related coronavirus MERS, as well as Ebola.

ChAdOx1, pronounced "Chaddox-one", is a version of a common cold virus that has been modified not only so that it doesn't cause symptoms, but also so it carries some genetic material of the coronavirus.

It infects human cells, turning them into factories producing one of the viral proteins, which in turn trigger an immune response and should protect people against future infection.

Using tried and tested technology allows scientists to speed up the clinical trials. The medical regulators are satisfied that ChAdOx1 is robust and broadly safe, so the researchers can begin trials on healthy volunteers far sooner.

The Phase One clinical trial is now under way.

Around 500 volunteers will be given either the vaccine for coronavirus or a licensed meningitis jab. That way they can tell whether the experimental vaccine is more likely to cause side effects such as a sore arm, fever, or a headache.

They should also be able to see at an early stage whether people given the new vaccine are less likely to get COVID-19 than the control group who have been given the meningitis jab.

Its effectiveness will then need to be confirmed in further phases of trials, involving as many as 5,000 people.

The biggest challenge in the trials will actually be the success of the lockdown, which significantly reduces the amount of virus being transmitted between people.

So, to properly test the vaccine's effectiveness, the scientists are planning to give it to healthcare workers on the front line, who are at greater risk. They might even have to go abroad to a country where the epidemic is still raging to get the results they need as soon as possible.

Manufacturing will also be a challenge. Britain doesn't have vaccine plants able to produce the billions of doses the world needs.

Even to get to the one million doses planned for September, the Oxford team has had to collaborate with three manufacturers in the UK and four abroad.

The government has said it will accelerate the building of the new Vaccine Manufacturing and Innovation Centre in Harwell, but it still won't be ready until next year. It's a little late.